Supply chains are undergoing a dramatic transformation. Many companies are considering bringing at least some of their manufacturing operations closer to the countries where they sell their products. The Covid-19 pandemic isn’t the only reason behind this trend, but it’s certainly spurring it on.

Large container and cargo ships have now returned to the seas. World trade is slowly regaining momentum after the upheaval of the coronavirus pandemic in recent months—even if volumes are still far below the level of previous years. For all we know, they might never return to that level. The coronavirus crisis has severely disrupted global supply chains. As the world went into lockdown, long-established transports and routes ground to a virtual standstill. It very quickly dawned on us just how much we depend on functioning supply chains for our day-to-day needs. Globally integrated, just-in-time manufacturing was all functioning like clockwork—that is, until the Covid-19 pandemic struck.

According to the German Economic Institute (IW), fears started mounting very early on in the outbreak that the virus would create acute disruptions to international supply chains. These fears were not unfounded. For weeks, barely any cargo ships arrived in Europe from Asia. When inventories ran out, companies were forced to scale down production or even shut it down altogether. According to an IW survey in June, 60 percent of companies were affected by disruptions to international value chains, with 18 percent experiencing severe production losses.

Even that the lockdown impacted the whole world at practically the same time, companies didn’t have the option to quickly find alternative sources, and logistics service providers other routes, as they would if they had experienced local disruptions. Soon came the calls to change global flows of goods. The urgency intensified following a period in which drugs, protective clothing, and face masks were in incredibly short supply; even the most avid supporters of globalization were calling on companies to relocate production back to Germany, or at least to Europe.

Companies are rethinking their supply chains

Many companies are responding to this call and are now reevaluating their supply chains, as a survey conducted in July by the Association of German Chambers of Industry and Commerce (DIHK) shows. According to the survey, almost 40 percent of companies are currently seeking out new, closer suppliers. Several companies also planned to relocate production back to Germany and other European locations.

Strategy consulting firm McKinsey found that in May, about one in two companies from the automotive industry and from the plant and mechanical engineering sector that were hit hard by the disruptions said they wanted to bring their production operations closer again. Describing the development, DIHK foreign trade chief Volker Treier says: “The crisis is changing how we do business and, in turn, the supply chains as well.”

Another effect of the coronavirus crisis was to give digital transformation added momentum. According to a study by consultancy firm PwC, companies plan to up their investment in monitoring and managing risks in their supply chains. In turn, this will require new digital technology. “We’ll see an uptick in the adoption of digital technologies in supply chain management,” the market researchers predict.

Christian Kille, Professor of Retail Logistics and Operations Management at the University of Applied Sciences Würzburg-Schweinfurt and co-initiator of the “Logistikweisen” consulting initiative, is also in favor of regionalizing logistics chains. “Companies are evaluating ways they can reduce the length of their chains,” Kille says. In his opinion, however, this has little to do with the current situation. The pressure to make supply chains more environmentally sustainable, growing online trade, and the need to respond to fluctuating customer demand more quickly had already triggered a trend toward regionalization years ago. All the pandemic has done is intensify this development.

It’s unclear just how fast this new approach will come about, however, because the situation is clearly starting to relax now. According to the IW, a good third of companies surveyed reported severe disruptions to their supply chains in March. Now, only 12 percent of the companies expect a shortfall of inputs from abroad, and especially from China, to impact their business processes this year and next.

Based on some current indications, many companies aren’t looking to make any radical changes to their supply chains at all. In March, 11 percent of the companies surveyed stated that they were strategically reducing supplies of inputs from China or were considering transferring production back to a closer location. When asked again at the end of June, only about 2 percent were still considering this option.

Nevertheless, things are unlikely to return to the way they were before the pandemic. For example, companies must be increasingly prepared to face trade wars and customs duties, which, with China’s growing claim to power, could be imposed more frequently not only by the US but also by Europe.

“The US-China trade war had already started to reshape global manufacturing and supply chains and boosted trade in other parts of the world, such as Mexico and Vietnam,” says Paul Tostevin, Director of World Research at real estate consultancy firm Savills. Political pressure is also a factor, he notes, observing that “France, Japan, and India are making calls for more economic self-reliance.”

The logistics experts at Savills believe that in Europe, it is the eastern European countries such as Ukraine, Serbia, and the Czech Republic that will benefit in particular from nearshoring of supply chains. Over in Asia, Indonesia and Thailand could be low-cost alternatives to China. Another potential development they foresee is the establishment of new logistics hubs, for example in Morocco, which is easily accessible from western Europe.

However, supply chains are often so complex that relocating them quickly becomes a costly endeavor. According to the market researchers, just how advantageous such nearshoring really is ultimately depends greatly on the product. Savills expects supply chains to become even more fragmented in the short term.

What can the pandemic teach us with regard to logistics? It seems unlikely that things will simply go back to the way they were before the coronavirus outbreak. DACHSER CEO Bernhard Simon hopes that companies will radically reassess their approach: “In the past, logistics was often seen as a procurement cost factor that had to be optimized.” Now, he explains, decision-makers in companies and governmental organizations must increasingly examine their value chains—which up to now have been very broadly spread—for potential risks. A more proactive approach must be taken to managing these risks, and the new conditions factored in.

“Nationalizing or regionalizing supply chains entirely is just as suboptimal and risky as procuring all products from a single country,” Simon says. But keeping distances as short as possible, and costs and the carbon footprint as small as possible, shouldn’t be the only priority here. “The trick is to establish robust supply networks that intelligently integrate local suppliers as well as those in China, the US, and Europe. Proactively putting appropriate backup arrangements in place is a key part of this.” 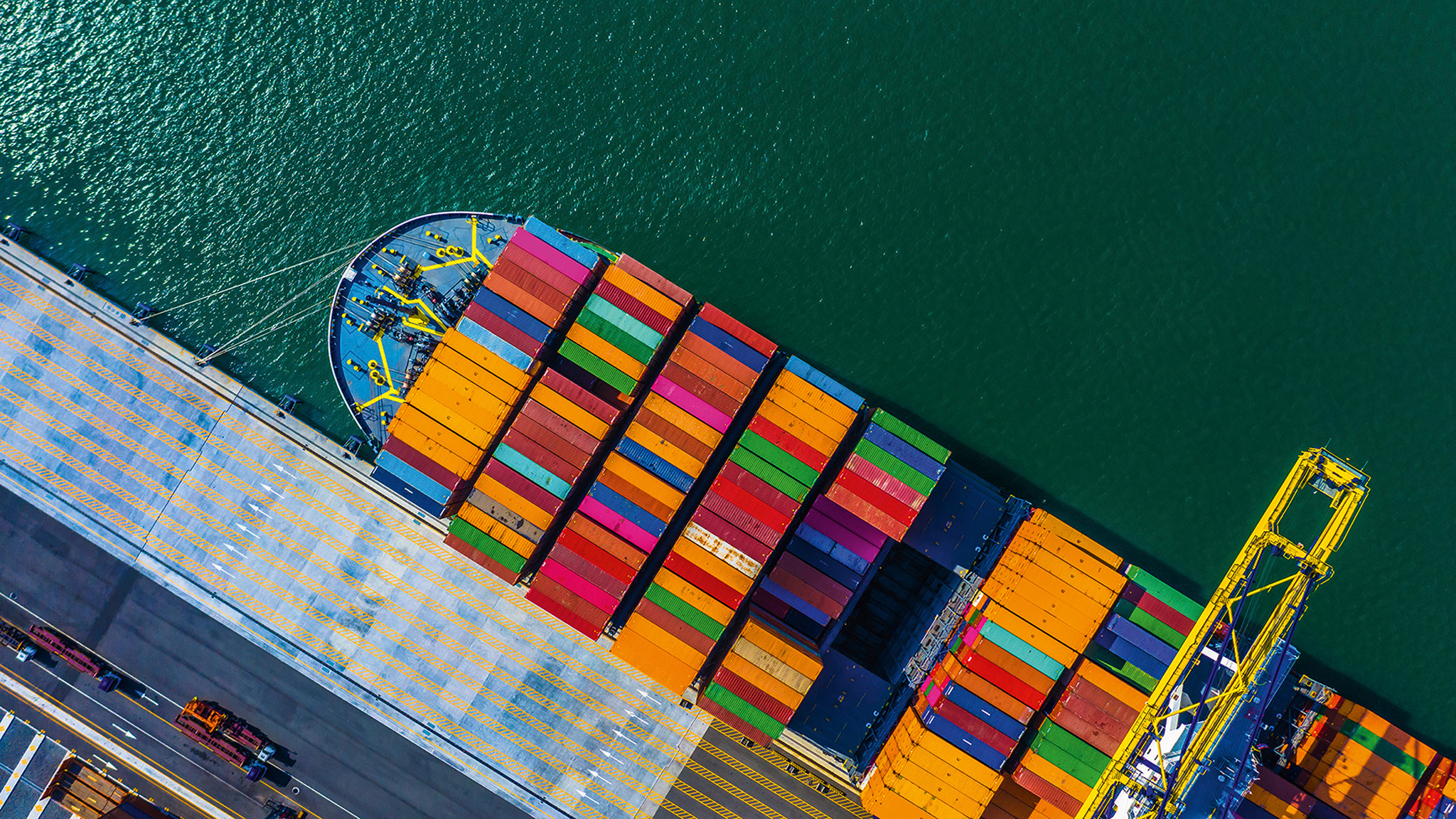 Another takeaway from the pandemic is that supply chains will be much more flexible and more broadly diversified in the future. And despite all trade disputes and political differences, China will continue to be a link in these chains. This is reflected in the acute shortage of air and sea freight capacity, which has led to a boom in rail services and even overland transport by truck between China and Europe.

Brexit is coming – but then what?

The United Kingdom and the European Union are in the middle of a lengthy and complicated series of Brexit negotiations.

As the airfreight capacity crunch continues, Dachser is adding dedicated charter flights from China to the U.S.

Digitalization is advancing in many areas, one of which is logistics. No-code platforms and other digital solutions can help optimize processes in everyday work. The former are online modular systems that provide predefined elements to simplify and expedite the creation of digital applications. Even without in-depth IT knowledge, employees can digitalize analogue processes on their own without spending time programming. These and other digital aids are in use in the DACHSER network as well.

The Novel Coronavirus Pneumonia recently spread rapidly in China and many cities and provinces have confirmed cases. In order to keep the epidemic under control, the Central Government has announced the extension of the Lunar New Year holiday to February 2. Local authorities, however, have requested enterprises in that region to not have their employees return to the office until a specific later date, mostly on February 10.

Most of the DACHSER branches will officially re-open on February 10. Starting from Monday next week, February 3, depending on cities and permissions from local authorities, skeleton staff will be arranged to enter the office building to manage critical shipments and minimize impact like detention, demurrage fee, TLX release and etc. We regret that we could not provide full operations but will try out best to maintain basic services.

The date for re-opening is changing on a daily basis and is subject to change depending on the situation. As of today, January 31, 2020, the re-opening date of each branch is as follows:

DACHSER’s staff from Wuhan branch will work from home and part of the operations will be handled via our Shanghai team. Hubei Province Authorities announced that customers will need to apply transportation certificate from the local government and hand in the certificate to logistics company if they wish to have shipment to enter or exit the province by trucks.

While we are trying our best to keep the operation as smooth as possible, please note that most of the factories in China are still closed; trucking services, flights and terminals are operating at minimum service level. Delays and other operational issues are to be expected.

We will continue to update you via our website with the latest information on how this is impacting your supply chain. Should you have any concerns and/or queries, please feel free to contact your local DACHSER representative.